On Sunday we had a double reason to celebrate. Father’s Day and a Birthday celebration . I just think celebrations are not complete without a cake. In this case a Chocolate and Vanilla Buttermilk Cake.

Celebrate we did, at this wonderful Brazillian restaurant in Earlsfield called Nabrasa. Wonderful warm service from the staff, delicious cuts of freshly BBQ meats, beautifully prepared salads. Thank God for loose fitting dresses, because by the time we left I was stuffed. I may have over indulged a tad bit.

I was able to capture an ok picture of what the cake looked like on the inside. It’s not the best photo, forgive me. 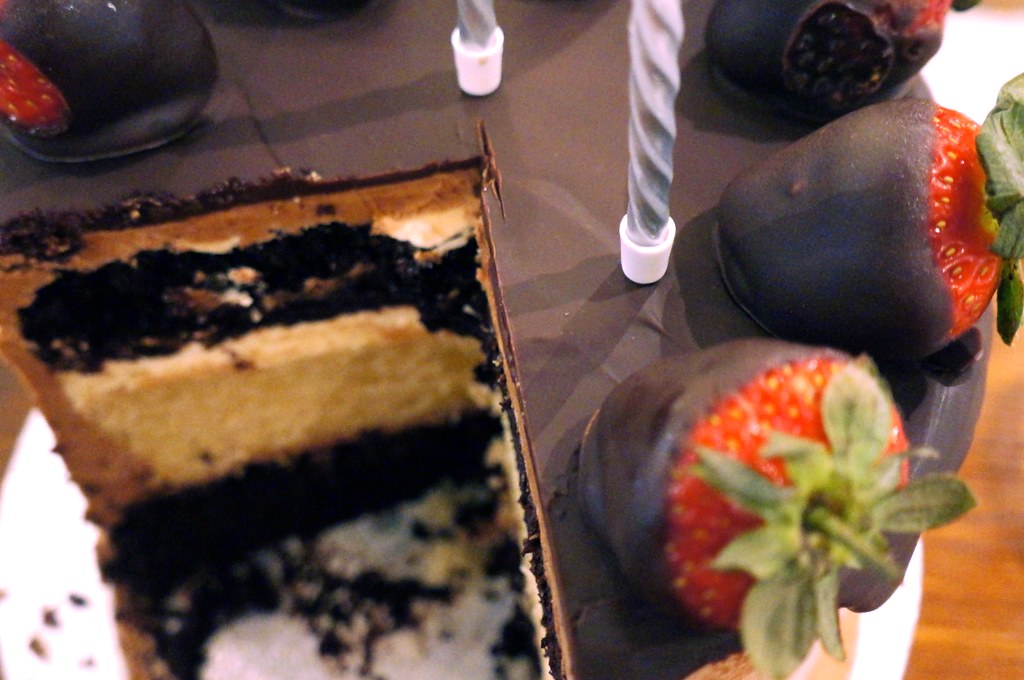 In the bowl of the stand mixer sift sugar, flour, cocoa powder, baking powder, bicarbonate of soda and salt. Using a paddle attachment mix until combined,

In a measuring jug or large bowl, combine buttermilk, vegetable oil, eggs and vanilla . With mixer on low speed, slowly add wet ingredients to flour mixture. Add hot coffee to mixture and stir until well combined, scraping the bottom of the bowl with rubber spatula.

Divide bater evenly between cake tins and bake for 30 - 40 minutes or until a tooth pick inserted in centre comes out clean.

Mix together milk and vanilla.

In the bowl of mixer beat butter and sugar until light and fluffy. Sift together flour and baking powder. With mixer on low, alternately add the flour mixture and milk mixture, beginning and ending with flour mixture.

Bake for 20 - 25 minutes or until tooth pick inserted in centre comes out clean. Leave to cool tin on wire racks for 10 minutes, then invert onto rack gently, discard parchment paper and cool completely.

Wipe bowl of electric mixer and attachments with paper towel and lemon juice to remove any trace of grease. In bowl of standing mixer combine egg whites, sugar and salt over a pot of simmering water. Whisk constantly until mixture is warm to touch and sugar has completely dissolved and or until temperature reaches 160 degrees Fahrenheit on a candy thermometer.

Using a whisk attachment starting to whisk until meringue is thick and glossy and completely cool, about 10 minutes.( Test by touching bottom of the bowl)

Switch to a paddle attachment and with mixer on low speed add butter cubes one at a time mixing well after each addition  and beat until frosting is smooth. Add vanilla and beat on low speed until well combined.

Using a plastic spatula fold in cooled melted semi sweet chocolate into the rest of the buttercream.

I wrap my cake in cling film chill cakes in the fridge overnight before cutting and icing. It is always best to work on a chilled cake. If swiss meringue buttercream is too soft, put in fridge for about 15 minutes . I use a turn table to easily rotate the cake whilst icing and smoothing  Crumb coat is a thin layer of icing applied to seal in the crumbs   For smooth edges i use a bench scraper