Moist Vanilla Cupcake with an oreo cookie base and piped with White Chocolate Buttercream . This is perfection in a cupcake, an absolute delight.

Inspiration can literally come from anywhere, could be from a pair of shoes, music, from family. This came from my little cousin after she asked for an Oreo cupcake recipe. She loves oreo cookies and i love them as well. So i didn’t think twice about making these oreo cupcakes. The  cupcakes are soft and moist with an oreo cookie base.  To compliment this yummy vanilla oreo cupcake is white chocolate buttercream swirls. I  have shared a video showing how to pipe them.

If you love cupcakes and cookies, then you are in for a treat with this .

Wishing everyone a Happy Easter. 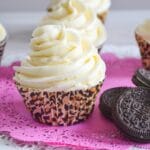 If you made this recipe, I would love to hear from you.Tag Bakes By Chichi on Instagram or hashtag #bakesbychichi